In 1928 John Piersma started the first Holland Farms door-to-door milk delivery. He was joined by his new bride, Evlyn, on a below freezing morning in December of 1933.

John and Evlyn each had their own truck and delivery routes, serving downtown Utica and surrounding areas. Evlyn gave up her route in 1940 to start a family, but milk delivery continued throughout World War ll with John’s brothers Sid taking over the milk bottling production, Pierre driving a milk route, Herman running the family’s dairy farm, and Jacob buying and running a second dairy farm. 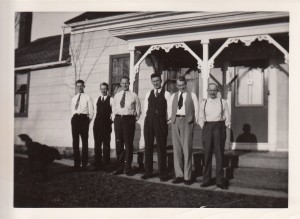 By 1950, Holland Farms had four men delivering milk to residences, businesses and hospitals six days a week. In 1955, John opened Holland Farms Dairy Bar and Bakery on the triangle in Yorkville, employing two Dutch bakers to produce fresh, quality baked goods for the community, moving to its present location at 50 Oriskany Blvd. in Yorkville in 1966, onto the site of the former Sal’s Barbecue. A second Holland Farms Bakery was operated in Clinton for several years in the late 70s and early 80s, on the current site of the Clinton Post Office.

Since 1980, Holland Farms Bakery and Deli has been owned and run by the daughters of the founders, Suzanne P. Harrington and Marolyn P. Wilson. They currently employ about 70 people who help them continue the fresh quality and consistancy of their products that was started by their parents, John and Evlyn.

Holland Farms’ billboard, featuring cows Cupcake and Chucky, has been a landmark on Oriskany Blvd. since 1955.

In 1996 Herman Piersma and Richard Piersma, Pierre’s son, retired from the milk business and closed Holland Dairy after 69 years of supplying milk to the community.

All our donuts, cakes, pies and pastries are made from scratch, and according to the New York Bakers Association, we are a unique operation in the State of New York. We produce more baked “hand made” goods in one location than any other bakery in our state or New Jersey. “Mom and Pop” bakeries are being eaten up by big companies and there are few of us left doing quality “hand made” baking and still showing a profit.

We have had to compete with the in-house bakeries of the large grocery stores that have arrived in the Mohawk Valley, with their giant resources, convenience, and frozen product, and have fared well.

Check out our seasonal commercials, too – we think our fun sense of humor really shows! (And you might just spot a local celebrity covered in powdered sugar, too.)

Mike B. — I brought Holland Farms Half Moons to Kingston, Ontario this past weekend for my softball friends. They went NUTS over them, and tried to hide them in their bedrooms. Kept calling them “moon pies”, and I couldn’t get them to say Half Moons.
It’s about a 3 hour drive from Utica. When we were planning the trip, I asked if they wanted anything from the States. They requested Half Moons and Saranac Beer. It made me feel really good to bring so much joy to their weekend.