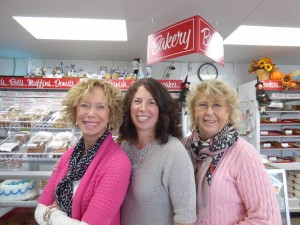 Having been in business in the Mohawk Valley for almost a century, the staying power of Holland Farms is evident. From when John Piersma bought his first milk route, and then his first delivery truck, (a one-ton 1927 Dodge G-Boy for $960) until today, Holland Farms has made itself known for quality products and friendly service. The billboard with Chucky and Cupcake and the shiny red trim of the building are landmarks in central NY.

Suzanne P. Harrington and Marolyn P. Wilson, daughters of the founders, currently own and manage Holland Farms Bakery and Deli, and have been recently joined by Suzanne’s daughter Heather Potrzeba. The business has grown to include a busy coffee bar, a deli featuring “everything from scratch” salads, lunches, take-out catering, and daily specials, while continuing to feature a full service scratch bakery. Holland Farms Bakery & Deli is committed to a quality product and service with a smile, continuing a proud Mohawk Valley tradition that started in 1955. 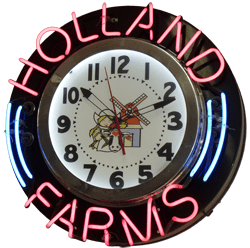 The officers of the company have received numerous awards for their public service, and were the first women to receive the John O’Toole Award from the Mohawk Valley Chamber of Commerce in 2001 for their exemplary service to the Chamber and/or the community.

Holland Farms Bakery and Deli also won Business of the Year in 2004 for a business with more than 50 employees from the Mohawk Valley Chamber.