If you’re worried about eating less-than-healthy this holiday season, Holland Farms can help you get some of those veggies that you need every day, with our variety of green salads. When you stop into the Holland Farms deli, we’ll be more than happy to serve you one of our nutritious, tasty salads, prepared fresh daily.

Choose from our great salad selections:

Our salads are a temptation you won’t have to resist – stop into Holland Farms and enjoy a healthy dose of deliciousness today!

At Holland Farms Bakery & Deli, all of our baked goods including pies are baked fresh every day. So while it might be easier for us to pop a commercially prepared frozen pie in our oven, that will never happen at Holland Farms. That’s because we pride ourselves in providing you baked goods like you remember your grandma making – and our pies are no exception.

Make sure you place your orders for holidays pies today – give us a call at 736-6044 and one of our friendly staff will be more than happy to assist you!

During the holiday season, we offer a wide variety of both fruit and cream pies, and we always use real fruit filling and real whipped cream – no skimping. So you’ll be able to serve your family and guests a pie that tastes just like homemade.

Our fruit pies for the holidays come in the following varieties:

Prefer cream pies? We’re sure to have your favorite kind for Thanksgiving: 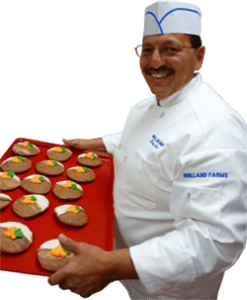